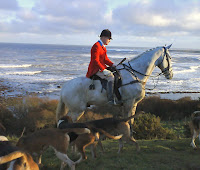 Now for something I thought no one would ever hear me say: "Boys! Put your boots on, right this minute. We are going to be late for the hunt." They probably shoot you if you are late for the hunt. "I say. Do you know what time it is? You're 10 minutes late. Stay where you are while I pour the powder into my pistol and load the shot, dammit." I did not want to miss a moment. It must be - gosh, how long is it since I went hunting in London? Oh yes, that is right - never. I have decided to roll with those moments which make me think "Who am I again?"

It was one of Northumberland's apple-crisp, beautiful mornings. The winter-blue sky looked like a child had smeared white paint across it with his fist. Cold, obviously. If I ever fail to mention the weather, imagine it to be "cold". If I ever fail to mention the terrain, imagine it to be muddy. So there we were, cold with mud on our rubber boots, on a far-away farm, the snow-capped Cheviot hills brooding in the distance and surrounded by nice giletted women thrusting haggis balls at us - well, it works for me. It is 10 o'clock in the morning and suddenly something called a Percy Cup seems like a good idea - a half-measure of whiskey mixed with a half-measure of cherry liqueur. In the city, this would be called an alcohol problem; in the country, it is a tipple. I could not decide whether it made it more or less likely the riders would fall off. It would certainly make it less likely they would notice if they did.

One of the mothers at school had invited us along since the hunt was meeting at her farm. Out of respect to her, I worked very hard not to think city thoughts like: "Didn't Tony Blair outlaw this?" and "go fox go". I also decided against talking the pros and cons of hunting through with the children before the outing. The risk of "Mummy says animals have rights too, don't you mummy?" over the coffee and shortbread was just too high. I must re-programme them tomorrow before they think what we did today was entirely normal.

Clutching warm sausage baps, we stood in the farmyard watching the proud, clipped horses grandly pirouetting amidst stiff-tailed hounds. I fought not to morph into a Japanese tourist, politely insistent that strangers in flat caps and down jackets take digital photographs of me to display to the folks back home. I failed. I explained to one farmer: "This is just so different to what we are used to." "No offence," he said. I braced myself for the inevitable left hook, "but I am constantly amazed how naive townsfolk are about country ways." He left me standing there with my Percy cup and camera. I think he went to talk to someone altogether less naive and tweedier.

If you ever wondered what happens at a hunt, I can assure you that the riders come along in muddy land rovers pulling horseboxes; they do not just leap out of the 19th century print your favorite uncle hung in the hallway in the shadow of the grandfather clock. I am not knocking hunting. The outfits are great. Before today, the nearest I had ever been to a hunt was a Jilly Cooper novel in which I am sure jodphurs were eased down over taut thighs. It is certainly true that everyone looks sexier on a horse, jodphurs tight over taut, etc. (This is as close as you will come to a Belle de Jour moment in this blog so enjoy it.) They played it all wrong when they fought and failed to keep their hunting rights, they should have campaigned on the slogan: "We look sexy - leave us alone."

When they set off, hounds legally following the trail of a fox tail of rags tied to a quad bike, rather than a fox you understand, we gave them a head start and then followed on in a land rover. The slightly strange thing about hunting is that the hunters too are hunted by quad bikes and 4X4s, some of whom follow the riders into the fields and some of whom wait at vantage points with binoculars as if they are on a strange safari. "Is that an elephant over there? No, no it's just Edgar on Tinkerbell. Tally ho Edgar."
(By the way, those rags on the quad bike. Tell Edgar, we're not that naive.)
Posted by wife in the north at 6:32 PM

"No offence...but I am constantly amazed how naive townsfolk are about country ways." That's putting it mildly!

You see ? The countryside defies all those cliched stereotypes so beloved of, on the one hand Nulabour propaganda, and on the other hand the 'style supplement' nonsense purveyed by mincing media metrosexuals..

Good to see your kids are actually getting some fresh air, exercise and an understanding that food doesn't actually start off life in 'Tesco'..

"Good to see your kids are actually getting some fresh air, exercise and an understanding that food doesn't actually start off life in 'Tesco'..". Hmmm - maybe Tesco carries different things than our US grocery stores do? I've never yet seen a fox's tail in the meat case.

I love this blog, and I look forward every day to reading it.

Anonymous said...
Good to see your kids are actually getting some fresh air, exercise and an understanding that food doesn't actually start off life in 'Tesco'..

Eat a lot of fox, do you?
i'd have to agree with you about the fresh air though. A run into the sticks for a breath of and back to town to live, works well.

But if there is no kill what is the point . Isn’t it a bit like fishing for a wooden fish .
Annuvver fing ,animals don’t have rights. The last thing a wild animal sees is the gaping maw of an uninvited dinner guest . Not its weeping relatives clutching hankies.
Still you have included drink sex and quad bikes so the male audience is more than happy overall .
Super post WITN

So about this hunt then, who were you following in Northumberland? As far as I know most hunts cancelled their meets from the middle of January because of the wind.

wife in the north said...

re anonymous:if you click on the link, you should see the hunt's own website. It was the Percy Hunt.

Check out the fashionable couple on the front page of this website.

Top tips for life in the country.

You should get yourself along to a Hunt Ball, think the next one up here is the Morpeth in May. The West Percy is my favorite in North Northumberland

A Percy Special is a marvellous concoction. It has a number of purposes, including:

1. It makes the fences look smaller and therefore more jumpable.

2. If the fence isn't as jumpable as you thought and you land on your arse, it helps to cushion the blow.

3. It is good insulation against the Northumberland cold that you are wont to harp on about.

I do belive hunting with-in the law today is much different exspereanced to what it is just gossiped about it towns! Yu and your children should have exspereanced this along time ago, i myself have hunted with the percy and i had a fantastic day!
Plus a percy special is a much needed magical drink that makes fences seem jumpable and speed has no limits!