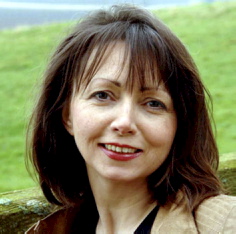 Judith O'Reilly is a writer and former journalist who worked for The Sunday Times, BBC 2's Newsnight and ITN's Channel 4 News. When she quit London to move to Northumberland she set up a blog called wife in the north and it "did that viral thing". Which was good and normally she doesn't like viral things because they make her sneeze. Pretty much immediately she was offered a book deal which was very nice of the book people, and the fact she wrote a book made her mother very happy. "Wife in the North" was a BBC Radio 4 Book of the Week and serialised in The Sunday Times and The Daily Telegraph. After a while she wrote another book - a novel which is living in a drawer and which she doesn't talk about anymore. Her third book called A Year of Doing Good was published in 2013. For a year she tried to be a better person - it didn't work. She's currently working on a political thriller.

I've read and thoroughly enjoyed both of your books! Please write another. My husband and I both love Northumberland and plan to return soon.
Very best wishes to you and all your family,
Kate Greenhalgh

Hi Judith,
I've recently read both your books and really enjoyed them. I was particularly moved by your writing about your first, stillborn baby. He was born two days before my son Matt. Matt's birthday was 16th Nov and he died 26 years later on the 8th August. The way you write about the anniversary of your son's death really resonates with me. To help us with our grief my husband and I cycled from Britain to Bulgaria - I know, I know it's sounds like a strange thing to do but why not? I've written a book about the cycle ride and of course Matt is in there too. My book is available free on Kindle from tomorrow for 5 days. It's called, Changing Gear. A Bike Ride from Britain to Bulgaria. If you fancy reading it just click on here http://tinyurl.com/co5b6ee
When I was reading your books I tried to guess where your cottage was and I think you must be near Bamburgh? We have a static caravan overlooking the sea at Warkworth although we're currently living in the South. Hopefully we'll have some time at the van in May. I love it there. best wishes and please write another book. Eileen

Hi, I've just finished reading A year of doing good, thought it was brilliant, left a 5* review on Goodsreads and will feature it on my blog next month. As a "mad blogger" it has inspired me to see if I too can to one good deed a day whilst saving money in a jam jar for a charity, If I can keep it up until the end of April I'll start writing about it o the blog
http://rosieamber.wordpress.com/

I've just finished reading the Year of Doing Good. Loved it and I am now thinking about the deeds I can do everyday!! Looking forward to reading your other book too.

Dear Judith!
I just finished "Wife in the North" and I absolutely love it! It is sweet, funny, sad and full of hope and love. Thank you for sharing your family with us!
Lots of love to all of you,
Susanne

Hi
I just finished reading wife in the north today and can honestly say it cracked me up. I found myself embarrassingly laughing out loud in all kinds of places whilst reading. That was a first for me so thank you. I'm gonna see if I can find your new book in Israel.

Hi Judith, Im writing from Western Australia but was born and brought up in 'The North'. Part of me stayed behind there though which makes things a bit tricky having the rest of you 12,000 miles away! I first saw your 'Year of Doing Good' book at work, I worked in a library, so not so very unusual, and was drawn to it because of mention of 'The North'. Loved your book and though Im not finished yet, I see we have some things in common. I am also a blogger of several years and I am also trying to get a 'Charity/Not For Profit' Idea into being. I related to all your comments about starting the thing off and how much of my life it would take up which seems to be more and more all the time all without me seeming to do much to propel it along. It seems to have taken on a life of its own dragging me along in its wake. I get a bit scarred sometimes that people will realise that it just "ME' and not some huge conglomerate. My most surreal moment was when the office of one of the richest women in the world, Gina Reinhart, sent me an email for my press release. We had been co nominees for a mining award (Gold Mining). So I have gone from a coal mining town to a gold mining town (: It would have been nice to have sent her one if I had one to send. I'm going to follow your blog with much enjoyment. Kindest regards Moya