There you see, I start writing about sex and I finally get a comment from a human being. (Merci, Pierre.) My only other comment which attached itself to a blog with a pound sign in it, was a spam message promising me "secret ways to earn money" if I read on. I didn't, which could explain why I am still stoney-broke. Obviously Pierre and I have a future - in the ether at least.
If Pierre isn't enough for me, well I will always have cake. 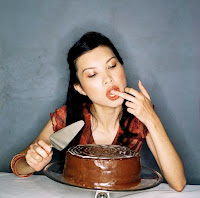 My five-year-old turned six yesterday (unsurprisingly, he will from henceforth be known as "the six-year-old"). He and his brother (previously known as the "three year old, henceforward, etc, etc) had a hideously noisy party yesterday afternoon. God, I hate children's parties. Does that make me a bad mother? No, I don't think so. It's all the other things I do that make me a bad mother - start drinking at 4.30pm while I make their tea, shout so loudly I scare myself, object on religious principles to sewing their nametapes into their school uniforms. Anyway my six-year-old just seems to take far too much for granted. Enormous wooden play castle meant for the garden and constructed in our teeny, tiny lounge for the birthday morning and then giftwrapped. "Fine. Thanks. Can I watch 101 Dalmatians now?" Party for 28 children. "Yeah it was good. Are there any more presents to open?" By rights, he should have drifted off to bed utterly blissed out and dreamt of balloons and icecream mountains. He remained studiously phlegmatic about the day and had a nightmare his brother's head fell off. On the upside, there is a large amount of uneaten chocolate cake which I am steadily ploughing my way through. I figure if my husband is going to make me live in the North-east, I will get fat in silent protest.
Posted by wife in the north at 5:01 PM

More of this please

Why sew name tapes in place when you have the magic of fabric glue? A couple of tapes might get lost in the wash every so often if you aren't lucky, but generally speaking, this has saved my sanity when the DD has gone through yet another growth spurt and new uniform bits and pieces need buying....