So who do you trust as a mother these days? Is Jimmy Savile proof you trust noone? The desire to protect your child is visceral, primeval and urgent. From the moment they are concieved you do your level best to protect them. When they are born, you feel you would kill for them. As they grow, you tell them to wash their hands to keep them from germs and infections. You teach them how to cross the roads to keep them from road accidents. You are distraught when a playground bully pushes them or teases them or calls them names. We protect them even from themselves when they sit too long infront of the XBox or the television.
But what happens when we cannot see them, when we aren't there to keep them from harm. When they go to school. When they take up sport. When they want to sing in a choir, join the scouts, overnight at a friend's house. How then do we protect them from the violators and the monsters - from the worst there is in the world?
How suspicious do we have to be? How vigilant? Are we surrounded by those from the dark side? Surely not - they are not the norm, they are the ugly and dangerous exception. Perverts need access to children. We know they go where children are. When we aren't there to stand by them with a broadsword and shield, our children's best defence is surely their knowledge. We don't diminish their innocence by packing up knowledge and tucking it neatly into their lunchbox. Information is their protection. Tell them there are bad men, there is inappropriate language and behaviour, that noone touches them, that noone should make them uncomfortable, that there are no secrets between a mother and a child.
Posted by wife in the north at 2:35 PM 14 comments:

That loud splintering crack is the shattering of illusions in case you were wondering, and that tinkling pit-a-pat? That's the broken bits falling through the cold autumnal air like so many leaves to lie upon the damp ground. Why did we need these heroes - Jimmy Saville and Lance Armstrong? Why did we need to build them up and gawp and wonder at them? Why did we need to believe so hard? Did they tell their own story or did we tell it for them? The amiable, kindly eccentric who raised millions for charity. A knight of the realm but a knight humble enough to act as a hospital porter. And the cyclist winning against all odds again and again, beating his competition, beating cancer, beating down suspicion - a legend of his sport. Armstrong outrages not only so much because of his cycling wins, but because he faced down death and we loved him for that bravery, that derring-do, that gingerbread-man attitude of "you can't catch me". We are responsible for our own heartbreak are we not, by building them into men they could never be because no-one could be that selfless, that noble, that perfect. And when they are revealed - Savile the monster who boasted even in death that it was good while it lasted, and Armstrong labelled a "serial" drug cheat - is it all the worse because they expose us in turn as naive, as fools of our own making.
Posted by wife in the north at 3:35 PM 5 comments:

Travels with my Aunt

What is it about sex? Yesterday wasn't a day when I was going to get sex right. Ever have days like that? However hard you try - you just end up getting the sex thing wrong?
So I linked up with Penguin's digital guru Sarah-Elizabeth to talk through social media stuff, and before we started work I suggested we grab a sandwich. Sarah works in publishing which obliges her to wear black and be in her twenties with wavy dark hair and long legs. I have only met her briefly once before in a meeting so we chat a while. It turns out she hasn't lived in London all that long and has come down from a previous job in Glasgow. She says she is still going up to Glasgow at weekends, and it is about then I turn into her hopeless aged auntie. I hear myself asking her if she is going back to Glasgow to see a boyfriend and she looks at me a little strangely but says no it is just much of her life is still there. Since she is from the North-East I ask her where she went to school and if she went to university, and I just about stop myself asking her if she is eating properly and has she made any nice friends. What can I say? I am 48 and she is young enough to be my daughter. Anyway we finish eating lunch and I am pretty sure Sarah is relieved when we move back into the office to start work. She whizzes between pages and iconic brushes and html until our work is done and I'm suitably grateful. Later, I check out the About Me page on her blog which start with the statement she is a lesbian - moreover a lesbian who "tries to put the world to rights when it comes to LGBT issues". So that is a big old Oops from Aunty right there. I read it and I bang my head on the desk three times straight after.
And my day carried straight on. I climb on the train back North and haul out the iPad for a couple of hours of TV. 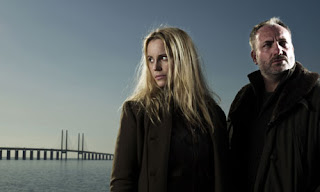 Since i missed the Danish thriller The Bridge when it was shown, I downloaded it for just such an eventuality as a long train journey without the children. I had only watched one episode about a month ago. Admittedly there had been a grim moment when a body turned out to be a top half of one woman and the bottom half of the other which must have made getting dressed that morning really hard, but all in all it had been OK.Twenty minutes in last night, a lanky moustachioed man goes into a bathroom and takes a tub of moisturiser from a shelf. The problem being he was naked. Actually that wasn't the problem. The problem was the fully-clothed guy sitting next to me on the train. I try and pause it but it won't pause. I scrabble at the iPad like a dog at the back door. The man next to me thinks I watch porn. I turn it off and sit looking at the blank screen. The chap next to me has his own laptop open and starts a game of what I am guessing is Civilisation. He is not happy when he has to stop building his empire to let the pervert out to the buffet. I don't really want the buffet. I want to fast-forward the scene so I can keep watching the episode. I decide the best place to do this is the loo. So I take the ipad into the loo. Too late I realise that this probably looks worse. This probably looks as if I have taken the ipad into the privacy of the loo to rerun my favorite porno bits and reach my destination just that little bit earlier than scheduled. I return to my seat and a further nine minutes into the episode the detective glances down a corridor to see a fat naked man in an armchair. I turn off the iPad again. The guy playing Civilisation either moves seat or gets off the train, and I watch for a little while longer till 40 minutes in when the female detective slides her hand down her pants and smiles. I give up and get my book out.
Posted by wife in the north at 5:17 PM 7 comments:

"Give us a twirl Anthea."

I am doing a twirl here. See I have revamped my blog (when I say "I" what I mean is an incredibly talented digital genius-person at Penguin called Sarah-Elizabeth Daley did things with code and photoshop that made my eyes water and I sat next to her and made insightful comments like "I still want it to be pink.") Likey? It is very exciting because I have been thinking about revamping the design since I came back to Blogland but I had this vision of accidentally pressing "delete" and everything disappearing.Not having proper computer support is one of the worse things about working on your own from home - I miss those nice men who'd say "Have you tried turning it off and on again?" Sarah made me brave though. She copied out numbers on a piece of paper and assured me with these magic numbers she could put it all back if I didn't like the new stuff. Apparently my blog was "very 2000". I looked at her blankly when she said this. I suspect this was her equivalent of me referencing the Victorian era. When you are as old as me however, 2,000 seems like yesterday. Anyway I took a deep breath and with Sarah's encouragement let go of the side and have doggie-paddled out into 2012.
Posted by wife in the north at 12:36 PM 7 comments:

Well I have donned a frilly apron and French maid's outfit (as a Labour MP once suggested I should) and done some housekeeping on the blog and I am left feeling dirty and old. Dirty because of the dust and cobwebs everywhere, and old because I went through my blogroll and two-thirds of my friends had given up blogging. So I have been ruthless and pressed delete but I miss them. Do people even have blogrolls anymore? With all this "following" and RSS feeds, there doesn't seem much point. Anyway I like a nice blogroll - it reminds me of Arctic roll and sausage roll and rolls in the hay, so I am keeping it. If I have deleted you prematurely, feel free to come back to me. I will accept most excuses - the dog ate my blog being my personal favorite.
Posted by wife in the north at 5:37 PM 16 comments:

I held my daughter last night a little too tight; last night too, when she pleaded to keep the light on and read her book I said "OK". Not "It's late," or "It's time to sleep." When the book was done and she knew the ending was happy and forever after, I lay awhile alongside her warmth, watching her perfect face, admiring the gap where teeth have been, and listened to her chat and giggle, when by rights I should have said "Shh" and "Hush a while" and "I've things to do. Good night." And later, as she slept, I pushed open the bedroom door to check on her, and check again, check that she was sleeping underneath her goose-down comforter all covered over with polka dots and fairy princesses, guarded by a panda and a white-socked kitten.
Posted by wife in the north at 4:43 PM 4 comments: