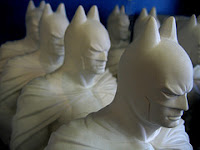 The boys went to yet another birthday party yesterday, this one, a fancy-dress discotheque. They have an infinitely better social life than I do. I seem to spend an awful lot of time handing round greasy pizza slices to their classmates, but at least that is better than my mum and dad who are currently locked into a hectic round of internments and funeral teas.
The problem with children's birthday parties is, ofcourse, other people's children. This time was no different. The parents of the birthday girl were far too involved cooking up smiley faces and miniature sausage rolls to supervise the party-goers. When two four-year-old boys squared up for a fight, I was faced with the eternal dilemma of whether you attempt to parent someone else's children or shrug, turn away and think "Thank God, you're not mine." Initially, I tried to ignore them, as you do, but the pushing and shoving went on. I looked round the church hall, desperately trying to spot a mother who might be willing to claim ownership of one of them, but nada. The boys were rapidly taking on that Friday night look of "Did you spill my lemonade?" Reluctantly, baby on hip, I went over.
"Look, this is a party," I reasoned as I knelt beside them. (I have seen those How To Be A Good Parent - At Least When The Camera Is On" programmes. "No fighting."
One of them promptly shoved the other.
"Hey, hey, hey," my voice grew slightly less liberal. "Where is your mummy?"
Batman looked at me, "I don't have a mummy."
"God," I thought to myself, "I have found the room's only orphan and I am pooping the party for him." I decided to pick on the other one before the orphan started crying loudly.
"Where is your mummy then?" I turned to the cowboy. I cannot say his mummy looked as grateful as she might have done when I interrupted her cup of tea to explain why I had brought her little hard man back to her. Infact, she looked distinctly hostile. I don't think she was a fan of the old African "It takes a whole village to raise a child" school of parenting.
But what are you supposed to do? We had already let some ghastly brat hold on to and then unwrap the pass the parcel present when he really should have passed it on to the child next to him. I only just stopped myself pulling it out of his jammy fingers and slapping him around the head with it.
As for sexual stereotyping, do not get me started on why all the boys were dressed as superheros while all the girls were in pink and mauve tuile with tiaras and glittery slippers.
"You know," I whispered to one Cinderella in a quiet corner. "You could be a superhero too next time."
She moved away to stand with Sleeping Beauty. They regarded me silently, holding hands and plucking at their opalescent sequinned trim.
"You don't have to be a princess, you know. You could fight for truth and goodness."
"But we look pretty," Sleeping Beauty told me and they skipped away.
Posted by wife in the north at 3:53 PM

As a wise friend once said, "Children are like farts, you can just about stand your own"...

Well done for trying to open the girls' eyes to more options. And don't forget that the boys are even more trapped than the girls.

hahahahahaha
(sorry i just found this blog and am just lov-ing it!)