This is an inter-galactic emergency 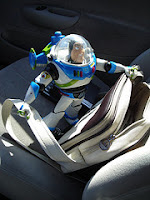 I spent all of yesterday driving around with a silvered spaceman toy in the footwell of the passenger seat. Just when I thought I was safe from his cultural imperialist tendencies, he would blurt out: "This is an inter-galactic emergency" and "I am Buzz Lightyear. I come in peace." Between the children and their paraphernalia, it is surprising I ever feel lonely. When we moved in, I counted the soft toys as I lined them up against the wall in the living room - 81 of them. All of them judging me with their little beady or woollen eyes as I attempted to put straight the wreckage of my life. Even more disturbingly, I know they weighed me up and found me wanting.

But I think the noise pollution put out by toys is worse than the acute feeling of paranoia they can engender. It is not just Buzz. Yesterday morning, I was struggling to find my way to school because I now live in a different house which means I have to drive along different roads. The problem is you drive by different fields which all look the same as the fields you used to drive by. I was running late because that is what I do, and looking for a turn-off which could have been anywhere, when my six-year-old decided to "start up" his orange plastic steering wheel. This engine noise is the sound another car would make if it joined you on the back seat and it distracted me long enough to miss the turn-off. I have to admit I did not say "Oh dear, Mummy just missed the turn-off". It was definitely one up from the "bloody, bloody" of the weekend. My six-year-old, with the infinite forbearance of a child for his mother, turned off his wheel while I manoeuvred my way back to the turning. Thinking about it, his teacher recently told me how advanced he was verbally. I wonder how advanced he really is. I must remember to teach him that discretion is an under-rated virtue.

Once I managed to deliver the boys to school, inter-galactic emergency averted for the moment, I was able to spend a glorious afternoon packing up more of the cottage kitchen. Highlights included chiseling soldered coins off the microwave, discovering a pan of pasta quills from before we moved and too many mouldy coffee cups to mention. Mould so thick you could lift it out and wear it as a hair accessory. I do have previous on mouldy coffee cups. I even have previous on the remains of a duck casserole which I forgot about the night before a fortnight's holiday. My housemates of the time, put a heavy cast-iron lid back on the pot and kept it for me. I do not think that was a nice thing to do. I think they could have washed it up. I ended up burying it in the garden. In future years someone will find it and figure it for a muti killing.

Today has not been much better, although at least I got through it without my electronic Disney sidekick. After the school run, I had to tear round a showroom with my builder looking at kitchens before abandoning him at the plumbers to go eat lunch with my six-year-old as part of the school's open week. This open week means my son expects me to be at his side at all times. He was less than impressed by my "Shall we do lunch then darling? I've got 45 minutes." (I didn't say that to him but I wanted to.) I blame time poverty; I still have not finished cleaning out the kitchen, we still do not have a working TV, apparently the dishwasher is faulty and last night the lights downstairs fused about 20 minutes before my newly installed internet connection gave up the ghost. When I rang, just short of 11pm, British Telecom politely me told to call back at 8am. Eight a.m.? When do they think mothers want to use their computer? Nine am? "Oh look everybody, the big hand is at 12 and the little hand is at nine, Mummy is just popping upstairs to start work then". Absolutely, once I have finished moving us out of our own house, unpacking everything in the rented house, deciding which consumer durable I am going to take to pieces first and calling India to talk down a jet.

When I got back from the school lunch, things at home were no better, both my four-year-old and the baby were in hysterics. Apparently he had wanted to come to lunch too and she wanted to see if she could cry louder than he could. I had to say to him: "You and mummy can go to lunch together tomorrow OK? Just you and me." I resisted saying: "I have got 45 minutes". Maybe this is what Buzz means by "inter-galactic emergency." Worst of all I forgot to buy my husband a Valentine's Day card. Actually, that was not the worst thing, I forgot to buy one and he remembered.

Did I mention, my head hurts.
Posted by wife in the north at 3:43 PM

It strikes me you are actually coping quite well - it just doesn't feel like it.

The real nugget in this was the teacher saying your six-year-old, 'is very advanced verbally' - gosh, that could be a euphemism for anything !

Be grateful you have 'Buzz' and not one of those crappy 'barbie' dolls my niece had one Christmas. American accents are awful at the best of times, but when you have heard 'Hi, Ken, Barbie's home' for the 34th, you really do want to pull her head off. Aqua were spot-on in their pi$$-take of 'Barbie Girl'.

I am a little disturbed by your comment that 'all fields look the same to me'...Hmmm.. I think this is being 'townist' to be honest.

What puts all this into some kind of perspective is the news about the gun crime in central London. I see all the political blogs slating Ken, but this is just a proxy for the wonderful old town of London being on a bit of a slide.

Looking at the news in Wales for a little comparison, here is their 3rd most important story today- a slightly different perspective..

p.s. Sorry, but I am perplexed as to why you have been welding coins onto your microwave ? Was this for artistic purposes ? Perhaps you can enlighten us in the next exciting episode...

p.p.s Don't worry about hubby and the non-existent valentine - he may think you are hinting he needs to offer you lots more 'tlc', though speaking as a man, hints are a language we ain't yet mastered.

Perhaps you could re-programme Buzz Lightyear to help with this task?..