Clap your hands if you believe in fairies 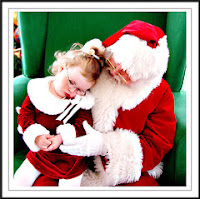 A New Mate came round with her kids for tea and ham sandwiches and we started talking about Father Christmas. It emerged that her children know that their presents come from Mummy and Daddy. No white-bearded icon, ho ho hoing, for them. If, out and about at a festive event, they glimpse the fat guy sitting in a flickering corner hung about with electric icicles, they know he is just that - a fat guy in a red suit who could not be described as having a career ladder. This family does have a Christmas tree (not sure how that one got in under the net)but there is no "magic of Christmas" as the retailers would have it. Actually, that's not entirely true. To be exact - "The magic is Jesus". These are children, by the way, who are getting cows and goats (to pass onto the poor Africans) for Christmas. Part of me thinks "Good on you turning your back on all those lies and the terrible excess" and part of me thinks "God, what a shame." I love all sorts of things about Christmas. I love the fact you can blackmail the kids into half-decent behaviour by reminding them how Santa Claus is watching. When it hits December, my children effectively live in a police state, under constant surveillance and aware that the least transgression is recorded in a big, red leather book by a red gloved hand. I love the idea too though that if you look up at the sky, you might just catch a glimpse of something whizzing behind a cloud trailing only a whisper of jingles. My friend justifies the fact her children do not believe in Father Christmas with a sad tale of how, at six, when she saw her mother planting out easter eggs one Easter Sunday, she was outraged by the lie and stopped not just believing in the Easter Bunny but in Santa Claus and Jesus. As an evangelical Christian she is presumably unwilling to run the same risk with her children. But I want to believe in Father Christmas. I would always clap my hands to tell a dying Tinkerbell I believed in fairies. My atttitude is - just don't get caught holding the bunny's basket.
Posted by wife in the north at 1:01 PM

Have you tried the one about the christmas tree being a beacon for santa to keep track of well behaved children and that if its not up on christmas eve he won't visit that house? Or am I just a Bad Mother?