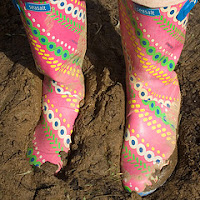 Life in London was simpler in many ways. Cafes knew how to make a decent skinny latte with an extra shot, muddy wellies weren't de rigeur and most importantly I had friends. Quite a few of them. Often in the media and certainly in work. Those who had children, juggled their responsibilities, adjusted their career expectations and got on with it. Those who didn't, tried not to talk too much about the exotic holidays and how long they spent in bed on a Sunday. I had things in common with my friends, an office, children of the same age, an outlook.
When we moved to Northumberland a year ago, I gave up on the friendship I had once known. There is, for instance, noone I feel I could immediately turn to in a crisis - I simply don't feel I know them well enough yet to impose. During my husband's absence in London for three weeks, I was left with my five year old, three year old and a teething baby. One Saturday, after four sleepless nights on the trot, I was desperate. I hated my husband, myself and my children in about that order. I spent the day on my knees. When Sunday dawned, I crawled onto the phone to confide in my absent husband that I simply didn't know how I would cope, what to do with myself or what to do with the children. "I know," came the reply. "Why don't you go to Alnwick garden, gather autumnal leaves and make a collage." "I know," I replied. "Why don't you just come home and you can make the f***ing collage." I know there are people up here who would have welcomed me if I had 'fessed up to a crisis but I just didn't feel I could. I was too low and my children too ghastly to inflict them on anyone. In London, I would have shown no such scruples. I would have thrown everyone in the car and expected my friends to welcome me into their homes even if I was insanely grumpy and my children monstrous.
Without a job to go to up here, my main route into friendships is through school. To start with the village church school is tiny so the potential pool of bosom mates is small. In any event, one of the perks of rural living is a free bus for the kids which cuts down the number of mothers you see. I was desperately disappointed when I realised one particular mum was now bussing her son in. Unlike me, she didn't consider the 40 minute round schlep twice a day worth a few minutes of chirpy banter and who can blame her? Well, me for one.
A substantial number of the other mothers I have met are married to farmers. Even if they aren't, they often have pet horses or sheep. I mean why? Don't they get enough mucking out to do at home already? If they don't keep something with four legs, they often keep chickens instead. For the eggs. Which makes their life a perpetual search for egg boxes. And they don't buy eggs, so you see their problem. Hardly any of them work outside the home. Some of them do some teaching on the side. They aren't news junkies. Few of them talk about books. All in all this town mouse struggles sometimes with her country cousins. Not least when religion comes up in the conversation - which it does. A lot. One couple have been immensely generous and welcoming but I can't say it' s not disconcerting when someone you had previously thought entirely sane admits, he is waiting for Christ to return to earth. He told me: "I believe the world will end, the four horsemen of the apocalypse will come among us, death and destruction, the whole package you know. I would only say this to another believer," I shift uncomfortably in my seat at this. Evolution he dismissed as "a theory". Homosexuality an "abomination". Even slavery was Okayed providing it met the biblical caveat of justice within it.
So take your choice. Do I remain a Billy-no-mates or do I ride with the apocalyptic horsemen and his friends, chickens perched jauntily on our saddles , my inhibitions scattering to the wind.?
Posted by wife in the north at 12:01 PM

Hmmm...I can see your problem.

I've never had to live in London, and to be honest I'm bloody glad - far too stressful. And I used to have 'a good job', here in Bristol. But then I quit, with a bag of cash, because the stress and hassle wasn't worth it. Luckily I don't have kids to worry about. I grew up in Wales, so I can relate to the countryside thing a bit more.

I can't help thinking if you had
chosen a half-way house between London which has its problems, despite the benefit of all those friends, and being stuck in the middle of nowhere with no job and kids, you might be able to come to terms with things a lot better.

But since you are from Leeds, then my suggestion of living near the lovely town of York may not be welcome. But then it is easy for me to suggest that - currently a man of leisure I can enjoy a nice time in Bath without kids to worry about.

Keep on trucking - you haven't hit a dead end yet, you're just on a bit of a detour. And anyway all those 'lifestyle' magazines are full of [quoting Boris Johnson] bloody Hugh Fearnley bloody Whittingstall telling you live in the country 'cos it's fab and you can make 'nettle tea' - that's if you can find some nettles that ain't been pissed on...

just found your blog via ST. I read it with tears pouring down my face. 20 years ago i moved to the Isle of wight with toddler son for my husband to take a wonderful job in the place he was born. You capture the feelings of isolation and loneliness I experienced and i can only say the first 7 years are the worst!

You will no doubt be inundated with comments today, following today's article in The Times.

I don't think that I've laughed so hard in ages.

I don't mean at your misery, but the way that you tell the story.

Yours is a classic 'expat' story: you have afterall moved to a foreign land!

My empathy is as somebody, who has had to deal with the same culture clash, lack of friendship, anonymity, and craving for what has been left behind.

I got dragged half-way across the Atlantic to a supposedly idilic place called Bermuda by my other half, who calls this place home.

The rest of the story is pretty much the same as yours........although I could never have expressed it so well!

Love your blog. What you write reminds me so much of how I felt when I first moved to the Calder Valley from Manchester 30 years ago. The culture shock was enormous. However, the town I live in (Hebden Bridge) is now full of people who talk about books and almost too many mates to choose from. Sometimes I long for the simpler days.

I agree with anonymous that you might have been better settling for some half way house like a small rural town rather than the deep country you seem to be living in at the moment.

I'll certainly keep reading your blog. It's had me laughing more than I have in ages.

BTW What's the local paper like? Some gems from our local rural rag the Hebden Bridge Times take some beating. "Bus routes stay the same" "Man Interfered with Lawnmower" and the star of the lot "Bored Youth Kicked Flower In Park". Can anything in Northumberland equal that?

Northumberland is a great county - just glad its not a fell known fact otherwise any more of you would head North for the peace and quiet of the hills, beeches, castles and beautiful landscape

You clearly haven't yet understood that you need to start befriending the animals. They'll be quite keen to get to know you, especially if you bring a few biscuits to share.

Having just read your blog update about your back problem I have the only answer. (I have tried everything else). It is called The Backstretcher. Sounds painful, but in fact was designed by a marine, who hurt his back so badly he could not walk upright (sound familiar?) It is a wooden support with rubber 'nodules' that revolve. You simply lie on it. Start low down,with only a few minutes use and work up the support and increase the time every day. (I am living halfway up a mountain in Montenegro-must be subject for a blog!!) and I have brought mine. Its important to use it every day for a few minutes-when you get up and before you go to bed. You can actually feel it separating your spine again and you feel immediately better when you have used it. (its really all you need) Go to www.backcentre.co.uk under 'massage products ENA2510 £79. I don't advise any other backstretcher. You will get your life back!

ive just been looking through all of your blogs, they are so heart felt but with a level of expectance in the 'things that always go wrong' and when they will definately decide to go wrong. They made me smile and laugh yet i still had heartfelt feelings for your desperation.....is there a book by you? i coudlnt help but keep readingall of your blogs, the way you write is so true to life..

I read your article in the Telegraph and couldn't wait to read the blogs, it is MY life, just the other way round. Been down South 8 yrs now and I am counting the days till we can move back up North (1810 approximately!) Only in the last year have I made some good friends (joined a gym despite hating exercise), I just couldn't be doing with parochial village life and small talk about children, wheat prices and who said what to who! I look back to those first few years and it still makes me want to cry, I was so lost, so lonely, so bored - I cannot count the times I locked myself in the bathroom and refused to come out until Husband had promised to put the house up for sale and move me back up North! It does get better, but it is better up North!!

HI
I have just read the book. Very good. I bought it for my wife for our anniversary. When she started crying reading about the sad death of the author's son, I just had to read it.
Having moved about a bit, in the North and the South, we can both empathise with trying to fit in.
Didn't like the huntin shootin fishin Tory boys though
Jim